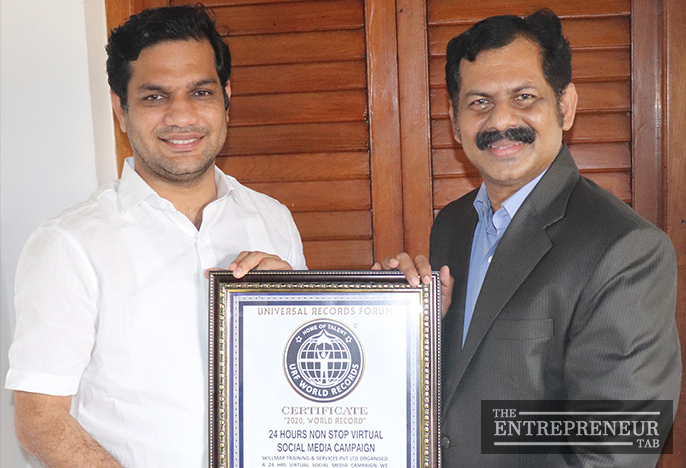 Often it’s thought that you can only start on a new venture if you are below a certain age. However, it is not the case at all, and a veteran naval artificer, Thasveer M Salim, is proving that to the world. Embodying the spirit of Sir Richard Branson, Mr. Thasveer has jumped head-first into the ocean of new opportunities with his start-up Media Waves.

A graduate in BSc Aeronautics, Mr. Thasveer, firmly believes the quote by Sir Richard Branson, “If you get an amazing opportunity and you don’t know how to do that; first accept it and learn how to do that.” After serving as an Aircraft Artificer for 20 years in the Indian Navy, he has decided to enter the entrepreneurship space and start on a new life journey.

Inspired by his father’s journalism career, Mr. Thasveer has decided to step into the PR industry by starting Media Waves. Media Waves is a Public Relations, Event Management, and Advertising company based out of Goa. As was the case with most event management companies, Mr. Thasveer’s company was also severely affected by the pandemic. Surviving on no income and only his savings, he was desperate for opportunities to expand his business.

Media Waves was started as a PR company but was later expanded into becoming one of Goa’s most favored advertising and event management companies. Starting with several beauty pageants and fashion weeks, Mr. Thasveer managed to take his company to the next level. Media Waves is now making its name pan India and even internationally. Started as a passion project post-retirement, Media Waves is now competing with global companies and has already hosted fashion shows in Colombo and Dubai.

Mr. Thasveer believes that whenever life hands you an opportunity, you must act on it. Even if you are clueless, you must accept the responsibility and work on it till you are finally proficient in it. After serving in the Indian Navy for practically his whole life, jumping into unchartered entrepreneurship territories was no easy feat. He has expanded his business into many new branches and has recently started providing training and career solution services.

Mr. Thasveer has had an exciting life, to say the least. He completed his schooling in St. Albert’s High School in Kochi and later joined the Indian Navy at the age of 17. He went on to complete his graduation in BSc Aeronautics from CUSAT and worked in Kiran Aircraft as an Aeronautical Engineer. He was even awarded a commendation by Flag Officer Commanding-in-Chief Western Naval Command for the dedication of duty. After retiring in 2017, Mr. Thasveer started Media Waves and organized fashion shows to promote budding designers.

Mr. Thasveer even holds a URF world record for organizing a 24-hour non-stop social media campaign. The campaign, WE SHALL OVERCOME, was organized on Rebuild India and had 71 speakers from across the globe, including Shiv Khera, Dr. Jagat Shah, Cdr Abhilash Tomy, Santosh Nair, etc.

Apart from becoming the number one PR, Event Management, and Advertising company, Mr. Thasveer wants to make Media Waves a professional training and career solution company. Mr. Thasveer is a man of few words, but his vision speaks enough. He is planning a tie-up with international pageants to grow the popularity of his company.

Apart from that, he wants to make the public aware of blockchain technology by promoting blockchain courses as well. A Veteran Navy Artificer turned entrepreneur, Mr. Thasveer, intends to make Media Waves the number one company in PR, Training, and Career Solutions in India and the Middle East.

Mr. Thasveer after serving the nation for years is now inspiring everybody else. He has proven to everyone that it is never too late to start something new. All it takes is passion and hard work, and nothing can stop you.